Kasa e Dil is an upcoming family drama aired on Geo TV. The wait of the audience has now been ended and the most hyped drama Teaser is out now on all social media platforms. The cast of this Drama serial includes Hina Altaf,  Komal Aziz, and Affan Waheed. This drama is direct by Zeeshan Ahmed, Written by Jahanzeb Qamar under 7th Sky Entertainment.

The story of this upcoming drama revolves around the relationship issues between wife and husband due to some side misunderstanding. Ali Ansari and Affan Waheed are playing a parallel role in this drama and both are playing the lead role.

Drama serial Kasa e Dil is a new upcoming drama serial of Geo TV Network. Komal Aziz and Affan Waheed are well-known faces for all viewers. Everyone knows from their working in the Pakistan Television Industry. Viewers can see actors in many dramas and now both are working together on the same project under the banner of 7th Sky Entertainment. Hina Altaf is also going to be working in this drama. She is the most famous actor in showbiz and also appears in many movies and TV dramas. Now she is playing a leading role in drama with Komal Aziz and Affan Waheed.

And there, amidst the chaos, stood he…

GIVE AWAY ALERT 👏 To thank you all I am GIVING AWAY this black anarkali outfit to one lucky winner. To enter the giveaway, tag 5 of your female best friends in the comments section and ask them to follow my brand @omalbykomal on Instagram. One lucky winner will be announced next week. BEST OF LUCK 🥰

You can also Read: Fitrat 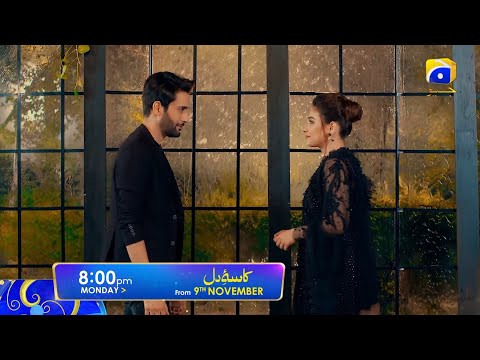